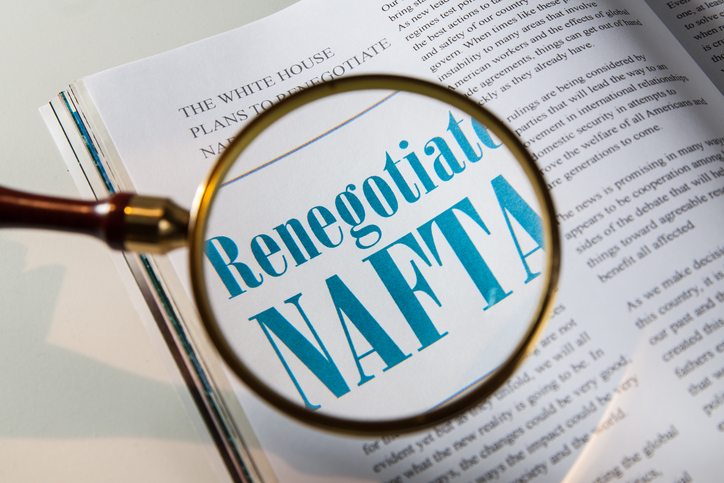 The current NAFTA deal has been a boon to U.S. agriculture in many respects. In 2016 alone, U.S. agriculture exported more than $42 billion in products to Canada and Mexico. In addition, each state in the U.S.—with the exception of Wyoming and Kentucky—exchange $10 million in goods with Canada every year.

These numbers are just a fraction of the trade benefits the U.S. agriculture sector enjoys, thanks in large part to (NAFTA). With the current NAFTA deal in the midst of renegotiation and facing possible termination, many in the agriculture industry are concerned that the ramifications will set back trade relations and drastically reduce profits.

Since August, five rounds of NAFTA discussions have been completed. The sixth round of NAFTA talks is scheduled to continue in Canada on January 23, where Canada and Mexico are expected to ramp up the negotiation pressure on the U.S.

With so much riding on the success of these talks, the agriculture community will be paying close attention to possible changes that could impact their businesses.

While the upcoming round was initially scheduled to conclude on January 28, representatives from Canada and Mexico recently announced a one day extension.

With both President Trump and U.S. Speaker of the House, Paul Ryan, now stating that they would prefer to rework the NAFTA deal rather than scrap it, the sixth round of talks promises to be more productive than the previous five.

According to a report released by Oxford Economic, withdrawing from NAFTA or terminating the agreement could cause the following economic factors:

The same study estimated that “the U.S. economy would recover from the NAFTA-related hit by 2020 as businesses adjust to the new reality.” A revised agreement would go a long way in avoiding the economic upheaval all three countries would experience if the long-standing trade deal is terminated.

Preparations Underway by Canada and Mexico

Even with President Trump indicating that a NAFTA deal might not be out of the question, Reuters reported that “Canada is increasingly convinced that President Trump will soon announce the United States intends to pull out of NAFTA.”

As a result, Canada is preparing for the possibility of the U.S.’s withdrawal from the 23-year-old free trade agreement. According to Crystia Freeland, Canadian Minister of Foreign Affairs, their “approach from the start has been to hope for the best, but prepare for the worst, so Canada is prepared for every eventuality.”

Mexico is also taking steps to prepare for a potential withdrawal by the U.S. from NAFTA. One of their biggest—and most imminent— concerns is that their presidential election takes place in 2018. Withdrawal from NAFTA by the U.S. “could have ripple effects that extend well beyond trade” and could even “provoke nationalist sentiments” that would impact the presidential election.

Despite these concerns, Canada is ready to start proceedings on the sixth round of talks in Montreal and move forward with goodwill towards the U.S.

What to Expect from NAFTA Talks Round Six

The biggest points of contention expected to take place during the sixth round of negotiations will surround the 3 so-called poison pill topics:

Trade negotiators will have their hands full trying to agree on resolutions for these three contentious topics.

Regardless of how the upcoming round of talks concludes, both Mexico and Canada are hopeful that a possible termination of NAFTA won’t hinder economic recovery, as long as the market doesn’t overreact.

Any unresolved issues will be addressed conclusively during the seventh and final round of NAFTA renegotiations.