The major cost in any system of poultry production is feed which accounts for up to 70 % of total cost per bird. The upsurge feed cost has been a major constraint in profitable poultry production in most of the developing countries. In order to cut down the feed cost, cheaper and non-conventional feed ingredients are sometimes in use which contain a higher percentage of Non-Starch Polysaccharides (soluble and insoluble/crude fiber) along with starch. Non Starch Polysaccharides (NSPs) are polymeric carbohydrates that differ in composition and structure from starch with beta linkage (Morgan et al., 1995) and possess chemical cross-linking among them therefore, are not easily digested by poultry (Adams and Pough, 1993).

Impact of NSP and Phosphorous:
A portion of NSPs is water-soluble which is the culprit for forming a gel-like viscous consistency in the intestinal tract (Ward, 1995) and reduces gut performance. Predominantly water-soluble NSP like arabinoxylans,ß-glucan,ß-galactoside which belong to the pentosan group, are assumed to be the factor responsible for the increase in viscosity of ingesta. These pentosans also critically increase the water intake by the birds leading to unmanageable litter problems caused due to wet and sticky droppings. This deteriorates the hygienic conditions and carcass quality of birds

Impact on Environment:
In areas with intensive poultry production, the phosphorus output is terribly high, leading to environmental issues like eutrophication. This happens as most of the phosphorus contained in typical feedstuffs is in the form of plant storage phytate,, which is not digested by birds.
In order to overcome this problem, use of enzymes in poultry is a growing trend and is going to be established as an inevitable resource in formulating and making balanced and nutritious diets. Enzymes are proteins in nature in biological systems. Their function is to catalyze and accelerate the rate of a reaction but are not themselves altered during the process. Enzymes are non-living organisms and are not concerned about viability or cross-infection/cross-contamination. They are stable at 80-85 degrees centigrade for a short period of time.
Another vital function of enzymes is that the rate of an enzyme catalyzed reaction increases with increasing substrate concentration, to the point where there is no more response and the enzyme is said to be saturated. So, we need to match the amount of enzyme with the quantity of substrate present in the feed grain (Acamovic and McCleary, 1996).

Enzymes are classified into 2 types based on their production site ie., inside the body and from an external source: 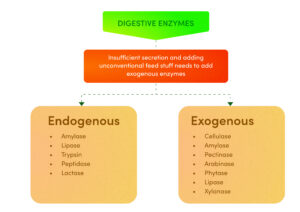 Source of enzyme :
Enzymes are produced in large scale in a controlled fermentation process where either yeast or specific bacteria strains are used. While these microbes grow and multiply in media, release enzymes. Bacteria like Bacillus subtilis, Bacillus lentus and Bacillus amyloliquefaciens, Bacillus niger are commonly used to produce enzymes. 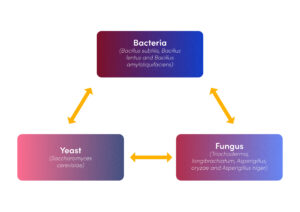 Mode of action:
Enzymes are substrate-specific and work with the basis of lock and key methods. Once lock and key matches it releases the nutrients and searches the other substrate to release nutrients. 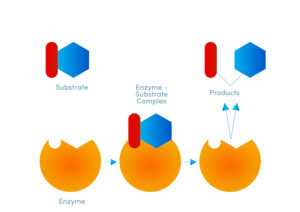 Some enzymes and substrate present in feed grain 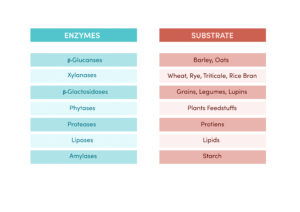 Scope for cocktail enzyme:
The cell wall of cereal or legume grain provide tensile strength, protect them against mechanical and osmotic stress .The main substance responsible for rigidity is non-starch polysaccharides (NSPs) like cellulose microfibrils, hemicellulose and pectins. Some of the commonly used ingredients in poultry feed are corn which have NSP level of 9.7%-10.3% of DM and is 91% insoluble (Bach et al., 1997),wheat have NSP of 10.2%-11.9% of dry matter and in which 19.5%-21% soluble fiber(Simon et al., 2015) and Soybean meal (SBM) have 19.6%-21.7% NSP of DM, with 29% soluble fibre (Dierick et al., 1994)
Due to the presence of this substance, they form a dense, flexible and sometimes rigid matrix which may deplete nutrient digestion of ingredients.

Effect of cocktail enzyme will have better effect on such feed formulation:

Recent field study was conducted in Bentoli’s research facility with two flocks of approximately 20,000 commercial broilers were chosen for the study and identified as follows:
•Pegazyme® Group: Birds fed with feed treated with Pegazyme® F Dry @ 200 g (7oz)/MT of feed.
•Control Group: Birds fed with regular feed without any enzyme supplement and checked on growth and performance of commercial broilers in the field condition. 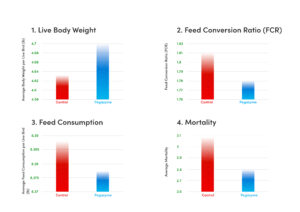 Conclusion:
The use of exogenous enzymes as a feed additive has hastily expanded. In the last two decades, extensive studies have been conducted to study the effects of feeding exogenous enzymes on the performance of poultry. The economic and social advantages of enzymes are well established and therefore the way forward for feed enzymes could be a bright one. However additionally the right enzyme cocktail for a selected batch of a feed ingredient will permit the formulation of better rations using an extensive range of ingredients. Any developments in this field must eventually improve the welfare of chickens, reduce the production of wastes and preserve resources.
Reference:
1. Acamovic, T. and B. McCleary. (1996). Enzyme Special Series-Optimising the response. Feed Mix 4: 14- 19.
2. Adams, E.A. and R. Pough.(1993). Non-starch polysaccharides and their digestion in poultry. Feed Compounder 13: 19-21.
3. Bach Knudsen, K. E. 1997. “Carbohydrate and Lignin Contents of Plant Materials Used in Animal Feeding.” Anim. Feed Sci. Technol. 67: 319-38
4. Dierick, N. A., and Decuypere, J. A. 1994. “Enzyme and Growth in Pigs.” In Principles of Pig Science, edited by D. Cole, J. Wiseman and M. Varley. Notthingham: Notthingham University Press, 169-95
5. Khattak, F.M., Pasha, T.N., Hayat, Z. and Mahmud, A., 2006. Enzymes in poultry nutrition. J. Anim. Pl. Sci, 16(1-2), pp.1-7.
6. Morgan, A.J. and M. R.Bedford. (1995). Advances in the development and application of feed enzymes.Australian Poultry Science Symposium 7: 109– 115.
7. Partridge, G. and C. Wyatt(1995). More flexibility with new generation of enzymes. World Poultry 11(4),17–21.
8. Simon, K., Vries Reilingh, G. De, Bolhuis, J. E., Kemp, B., and Lammers, A. 2015. “Early Feeding and Early Life Housing Conditions Influence the Response towards a Noninfectious Lung Challenge in Broilers.” Poult Sci. 94: 2041-8
9. Zanella, I., Sakomura, N.K., Silversides, F.G., Fiqueirdo, A. & Pack, M.(1999) Effect of enzyme supplementation of broiler diets based on maize and soybeans. Poultry Science, 78: 561–568.