Trace minerals are indispensable components in poultry diets. Minerals like Calcium, Phosphorus, and Manganese play a major role in growth, bone development of birds, whereas Copper and Zinc are responsible for maintaining the feather color. Minerals have a key role in enzyme structure like Catalase(Fe), carbonic anhydrous(Zn), SOD(Cu,Zn,Mn) and GSH(Se). There are two forms of trace elements available to birds ie., Inorganic and Organic form. Trace minerals in inorganic forms such as oxides, chlorides, carbonates and sulfates salts are used for a long time in poultry diets.

In commercial practice, inorganic trace minerals (ITM) are used to supplement 2–10 times than the amounts recommended by the National Research Council for poultry diets(Esenbuga et al., 2008). However, the bioavailability of inorganic minerals is significantly low as a considerable amount is lost and excreted through the feces due to antagonistic effects with substances present in the poultry diet. High inclusion level will leads to the mineral wastage and environmental pollution due to excessive excretion by the birds (Leeson, 2003) For example, 94% of total ingested zinc is added to the environment by excretion which may lead to phytotoxicity of soil( Zafar et al., 2018), Excess excretion of Phosphorus may lead to eutrophication

Normal antagonist effects seen are listed below with other minerals, vitamins and other ANF 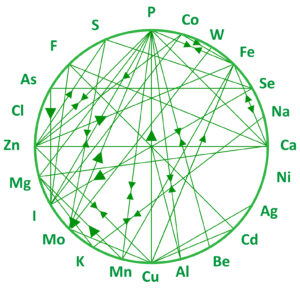 Ionized metals will be normally transported through the cell membrane using protein carriers. This process is pH-dependent, and so, the acidic pH within the proventriculus improves solubilization, whereas the neutral or basic pH of the small intestine reduces the rate of absorption. Solubilized metals within the gastric environment will probably form insoluble precipitates in their course through the small and large intestine. The presence of active ligands, like phytic acid, will intensify the formation of precipitates. This situation is significant in high phytate diets, such as those with high levels of soybean meal or rice bran, and can strongly impact mineral availability. Phytate content is very variable in soybeans and can reach upto 3% in soybean meals (Mason et al., 1992)

Competition for the same or similar carriers may interfere during transportation from the lumen into the enterocyte. The competition between iron and copper is normal; they share at least two membrane proteins like transferrin and metallothionein (Hill & Matrone, 1970). Carriers are small proteins, which can withstand high capacity of chelating free cations existing in the intestinal solution when proceeding to transport. Excessive copper may bind to those protein which may cause iron deficiency (El Shobaki & Rummer, 1979) 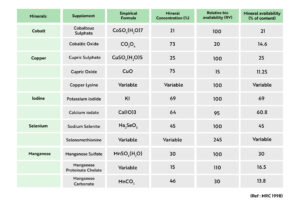 Organic Minerals:
Organic microelements have been principally defined by AAFCO (2000). The word chelate is derived from the Greek word “chele”, which means tweezers or claw. The reasons for this definition become clear when we see the structure of chelates. They are the result of electron sharing between a metal and a ligand. A ligand is typically an anion or a molecule, which takes an atom or a pair of electrons with available valances. Common ligands comprise oxygen, nitrogen, sulfur, halogens, or a combination of these due to their electronic structure

Chelated minerals have non-metallic ligands, and as a result its term is organic. Atoms, which are able to donate their electrons, are termed as donor atoms. Ligands with only 1 donor atom are referred to as monodentate, whereas those with 2 or additional are referred to as polydents. Solely polydents are able to form chelates, since they will bind a metal among their electronic dents or claws to form a coordinate bond.
Specific Metal Amino Acid Chelate is result of combination a soluble mineral salt with a specific amino acid resulting from complexing a soluble metal salt with amino acids ie., 1 mol of the metal salts will be combined with to 1 – 3 (preferably 2) moles of amino acids, which form coordinate bonds (molecular weight of the hydrolyzed chelate should exceed 800 Daltons) (Vieira et al., 2008)
Proteinate Complex/Chelate is the result of chelation of a soluble salt with hydrolysed protein .
Polysaccharide Metal Chelate, resulting from complexing a soluble mineral salt with a solution of polysaccharides which may be integral part of an specific complex
Chelation with methionine analogue like HMTBA which is not an amino acid (AA) but relatively an organic acid contains a hydroxyl group on the α carbon instead of the amino group found in Methionine. Its mineral binding is also alike to that of Methionine except that the hydroxyl group substitutes the amino group in the formation of the mineral complex (Dibner et al., 2004)
Yeast chelate: Minerals are added to solid phase fermenter and allowed to get absorbed but this phase is depend on following parameter like yeast strain, source of inorganic metal, Metal concentration, base medium, energy sources (like corn ,DDGC,molasses etc.,), pH, temperature, shaking speed, incubation time , inoculum size, and aeration. (Esmaeili and Khosravi-Darani, 2014)

Mode of action:
After mineral intake in chelate form, absorption will happen in any part of the small intestine whereas inorganic metals are typically absorbed in duodenum. After reaching to intestinal lumen when hydrolysis in gastric region where ligand atoms covalently bonded with metal atoms work as transporter and also protect the mineral atom from numerous antagonists in their manner like oxalic acid, gossypol, phytates etc. After that, these complexes get absorbed by enterocytes in the intestine whereas inorganic forms solely absorbed wherever they get transporter within the type of inorganic metal. Otherwise, they might be excreted (Swiatkiewicz et al., 2014).
Hudson et al. (2004) stated that supplementation of zinc in organic and inorganic form like -amino acid chelate and sulfate form , showed improvement of eggshell in amino acid chelate group that led to the production of 3.6 extra chicks at the end of the laying period.
Van Beirendonck et al., (2016) reported that Se content in the muscles of broilers fed a diet supplemented with sodium selenite was 133 μg/kg, whereas the broilers fed a diet supplemented with Se-yeast containing 26% or 69% SeMet was 161 and 267 μg/kg Se.
Khatun et al.(2019) reported that Proteinate minerals groups showed higher profitability in terms of overall performance followed by propionate fed broilers group.
Recent field study was conducted to check the impact between inorganic minerals and organic minerals(Complemin® 7+ & competitor product) in Cobb broilers for 5 weeks and grouping of the trial was as follows: