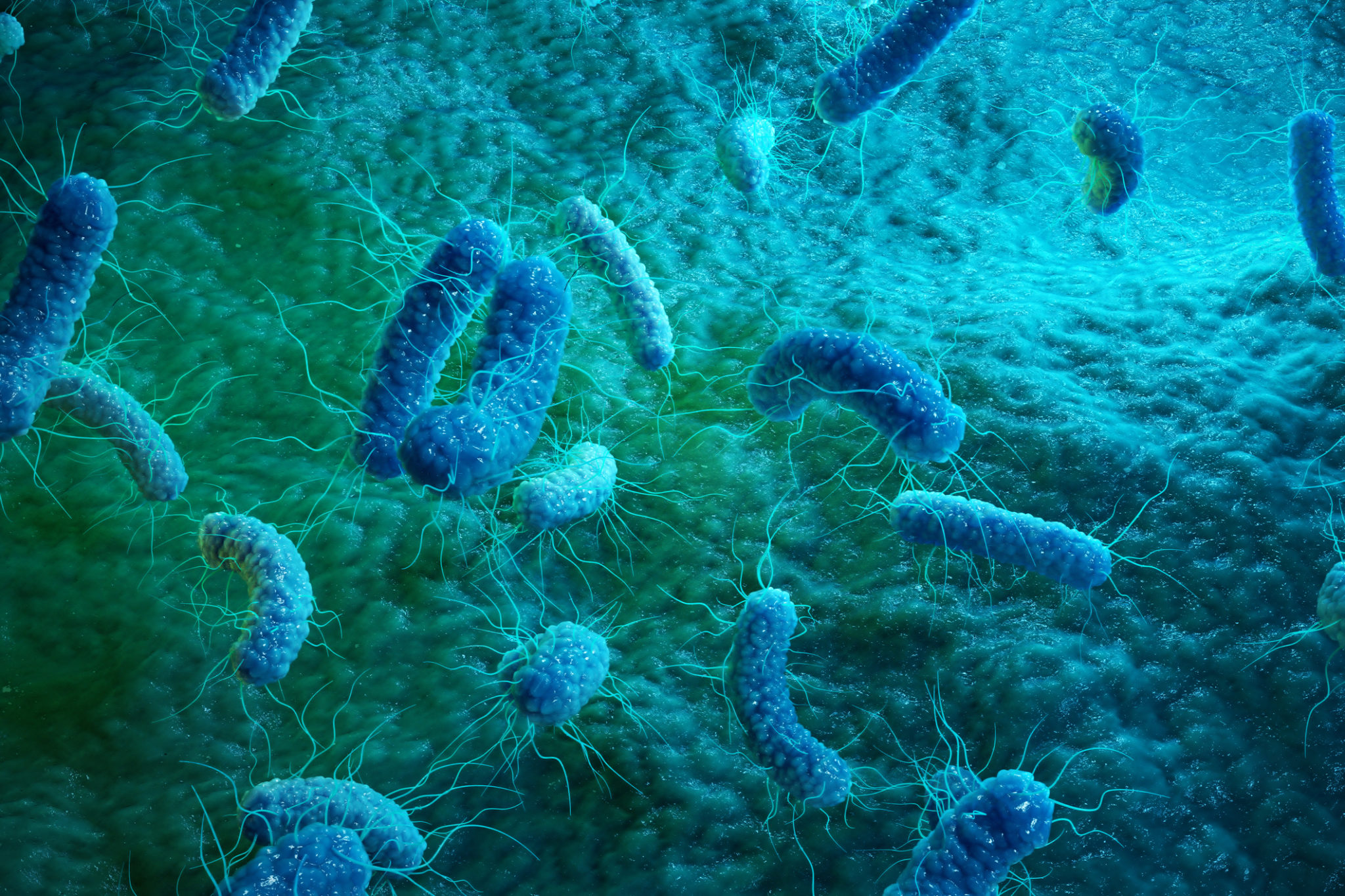 Safeguarding the health of your livestock is probably one of your top priorities and quite possibly one of the things that keep you up at night. The microbial load in your feed and raw materials may be growing exponentially and feeding microbe-laden materials to your livestock could severely damage their health and may even result in death in both animals and humans.

In order to reduce the microbial load of both feed and raw materials, a broad spectrum antimicrobial should be used. Some of the worst bacterial offenders use your livestock and ruminants as reservoirs, or carriers. Even worse, your animals may be asymptomatic—passing infections down through their meat, urine, feces, and milk, without you even knowing it.

We’ve identified some of the top bacterial culprits: Salmonella, E. coli, Clostridium perfringens, Listeria monocytogenes, and Campylobacter. We’ll talk about where they are, how they grow, what their effects are, and how you can treat them before they do irreparable damage to your livestock and ruminants.

Salmonella is a genus of bacteria found in the intestinal tract of warm-blooded animals and are capable of causing quite a bit of harm. It can survive several weeks in a dry environment and several months in water. Salmonella causes the most harm to humans but a few strains can also cause illness in their animal hosts.

Feces: Because Salmonella lives in the intestinal tract, it is often spread through feces. Poor hygiene helps spread this pathogen which  can travel from feces to feet, hair, skin, and detritus on the ground (hay, grains, etc.).

Hygiene: Salmonella can also be spread during the slaughtering process. For instance, a carcass can be infected in an abattoir that hasn’t been properly cleaned.

According to the California Animal Health and Safety Laboratory, infections are most common in calves under a month old. The most serious illnesses are seen in newborn calves, young calves, and cows around calving. The most common signs are:

Because Salmonella symptoms can be similar to coronavirus, cryptosporidium, and E. coli, it is recommended that fecal samples are sent for a diagnostic workup.

In the gut of an infected animal, Salmonella has shown an acute ability to adapt quickly to antibiotics. This is why products, like Flamotin, are crucial to the treatment of salmonella in livestock—it’s a non-antibiotic alternative that removes broad-spectrum antibiotic treatments from your list of options.

Escherichia coli (or E. coli) bacteria found in the gastrointestinal tract of both humans and animals. Most types of E. coli are not harmful but there are strains, such as E Coli 0157:H7, that produce toxins and cause disease. The most common carriers of pathogenic E. coli are cattle but ruminants such as goats, deer, and sheep are also considered high-risk for infection. Other mammals and birds have also been found to be infected with a pathogenic form of E. coli.

Feces: Fecal contamination of water and feed are common ways E. coli is transmitted from animal to animal.

Foodborne: E. coli can be contracted by cattle and ruminants from eating fruits and vegetables that have been contaminated with the feces of wild and/or domesticated animals exposed to contaminated water sources.

Water sources: A recent Cornell University study found that one of the most common conduits for the spread of toxic E. coli for cattle is water troughs. Early results show that water-saving measures promote the growth of E. coli in trough water while troughs with higher water levels have lower levels of E. coli present.

For the most part, animals act as reservoirs, or carriers, of the toxic E. coli strains with either light or no symptoms being present.

Cleanliness. Most common hygiene and cleaning practices will prevent harmful E. coli outbreaks. Preharvest vaccinations are also an option to help reduce E. coli infected meat from reaching the public. Post-harvest protocols like vacuum steaming and washing carcasses with hot water remove contaminants. In general, it is recommended that control measures be put into place during all stage of the food chain processing from agriculture to kitchens.

Clostridium perfringens is one of the more complicated bacteria on this list. It can produce 15 different toxins in a variety of combinations and are divided into five main types: A, B, C, D, and E, depending on the type of toxins produced. Mostly found in goats and sheep, but also cattle, this bacterium can range from benign to deadly.

Hygiene: Like E. Coli, animals are mostly carriers, but many processing technologies don’t rid the infected meat of these bacteria.

Sporulation: Once a C. perfinigen is ingested and arrives in the small intestine of an animal, it forms spores and begins to produce its toxin. Some forms of C. perfinigen already live in the intestine and toxin secretion is triggered by other factors like diet or infection from another organism.

Type A: Often causes enteritis, abomasitis, and enterotoxemia in cattle as well as gastrointestinal diseases in horses, pigs, sheep, poultry, horses, and goats

Type B: Can cause dysentery and hemorrhagic enteritis in lambs which can invoke sudden death. It is considered one of the main reasons for neonatal diarrhea in piglets.

Type C: Can cause neonatal necrotic enteritis in horses, pigs, cattle, and sheep.

Type D: Can cause pulpy kidney disease and enterotoxemia in sheep and goats.

Type E: Impact is currently unknown as there is no confirmation of it causing gastrointestinal disease in animals or human.

In most cases, diagnosis is very difficult because the path the bacteria takes is not clear and it is often impossible to differentiate between each type. It also has a high range of heat tolerance and can withstand cooking and other food processing procedures.

Treatments recommended by the University of Georgia’s College of Veterinary Medicine include:

Vaccinations can go a long way in preventing the spread of C. perfringens and it’s recommended that young animals be vaccinated at 4 weeks of age and again 1 month later. Adults should be vaccinated at least once a year to help prevent outbreaks.

Listeria monocytogenes are small, spore-forming bacteria that grow under a wide range of temperatures.  It lives in soil and can be found in the GI tracts of both wild and domesticated mammals.

Feces: Like all other bacteria on this list, Listeria monocytogenes thrive in the GI tract of mammals. It is often spread through fecal to oral contact from one animal to another.

Spoiled silage:  It is primarily a winter-spring disease in feedlots and housed ruminants. Spoiled silage can carry the bacteria from one animal to another and outbreaks occur around 10 days after the spoiled silage has been fed to animals.

Milk: Listeria monocytogenes are also able to transfer via milk.

Rodents: Rodents can spread the bacteria through contact with feed.

According to the Cattle Site, symptoms include:

The disease caused by Listeria monocytogenes is called Listeriosis and is common in younger animals between one and three years old. It can also cause mastitis in cows.

Isolation is a weakness as it is transmitted through feces, urine, and milk. Isolating infected animals will help prevent the spread of the bacteria to other, uninfected animals.

Listeriosis is treated with antibiotics, but this is not the preferred treatment for livestock. Non-antibiotic alternatives, like Flamotin, can be utilized to treat listeria safely. Severe cases involving encephalitis may prove fatal if not treated early on.

Campylobacter species is a genus of bacteria that can cause gastroenteritis in both people and animals. It is found in the gastrointestinal tract of animals.

Feces: Animals serve as the hosts for these bacteria so contact with contaminated feces causes infection.

Foodborne: Meat of an infected host can transfer the bacteria to other animals and humans. Contaminated foods have included chicken, turkey, beef, pork, fish, and milk.

Water sources: Water sources like streams, rivers, ponds, and troughs can be infected by fecal matter from wild and domesticated animals.

What are its effects:

Chickens are the most prominent carrier, but other livestock and ruminants may contract and carrier the bacterial and infect the food chain.

Symptoms in animals can include:

Bentoli’s feed preservation antimicrobial, Flamotin, works by penetrating the cell walls of these harmful bacteria to ionize and acidify cell’s internal environment. The pH-sensitive bacteria can’t tolerate Flamotin’s latest pH gradient so the growth of the bacteria is inhibited.  The accumulation of Flamotin in the bacterial cells will disrupt metabolic functions making it harder for the bacteria to multiply and survive.