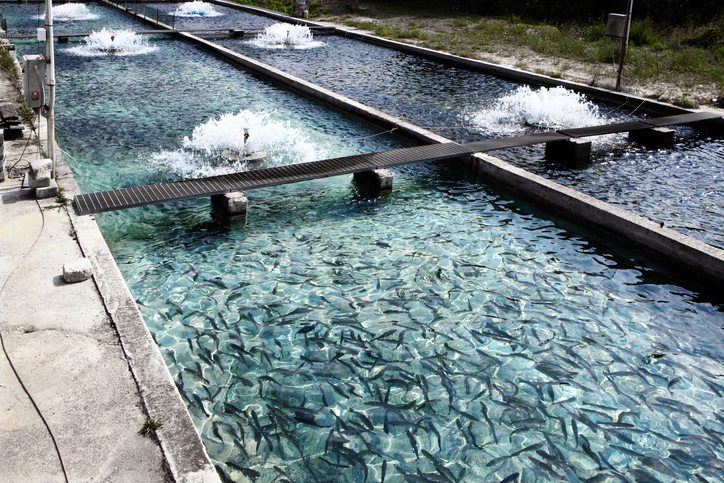 2017 saw its fair share of fish farming mishaps, but the most recent—and perhaps most newsworthy—took place in August. Cooke Aquaculture, an Atlantic salmon fish farm near Cypress Island, Washington, suffered catastrophic devastation from unusual tide activity that damaged the fish pens, leading to the escape of over 100,000 fish.

Nature’s unpredictability and some new legislation introduced this year have lead many aquaculture farmers to ask: Are land-based aqua farms a safer investment?

In response to the escape, Washington State officials have canceled an Atlantic salmon farming lease held by Cooke Aquaculture Pacific in Port Angeles.

While it was initially thought that the farmed species of Atlantic salmon would die out on their own without the protection of a carefully controlled environment, it appears many are still alive and well. Fishing crews of the Upper Skagit Indian tribe have been consistently catching Atlantic salmon in their nets that can be traced back to Cooke. The result of this discovery has prompted the Washington Department of Fish and Wildlife (WDFW) to speculate that the escaped fish have spread to multiple waterways.

The salmon escape and corresponding cancellation of the lease has heightened a state-wide debate on the impact of fish farming and whether stricter policies need to be put in place that will protect native species and their environments.

Some conservationists believe the future of aquaculture should be land-based in order to avoid many of the problems that occur in natural marine environments—the spread of disease, antibiotic resistance, attracting sea lice, and, of course, escape. This type of aquaculture operation, however, is much more expensive.

Ocean tides and shifting sands help to carry away fish waste in marine environments and, alternatively, in land-based tanks, natural tides are replicated and pumps, bacteria, and filters help keep the water clean. The maintenance of these systems sometimes requires more than 7x the cost of marine-based fish farming.

How to Avoid Losing Fish, Feed, & Profits to Mycotoxins in Aquaculture

Looking at a Bright Future for Aquaculture

Despite recent coverage of escapes, aquaculture is still making great progress in gaining equal footing with land-based agriculture. Wisconsin passed a new law in June 2017 that added aquaculture to the state’s definition of agriculture and streamlined fish farming regulations.

Even with the costs of land-based fish farming higher than marine-based aquaculture, a number of land-based fish farms have seen a promising decline in production costs. Kuterra—a land-based Atlantic salmon farm on Vancouver Island in British Columbia—saw a 30% drop in capital costs in 2015. In November 2017 Kuterra reported that they were breaking even and no longer operating at a loss.

Profitability may be a few years away for aquaculture farms as the focus shifts towards land-based operations, but with new and improved technology being developed and substantial growth projected for the industry, the future looks bright for aquaculture.