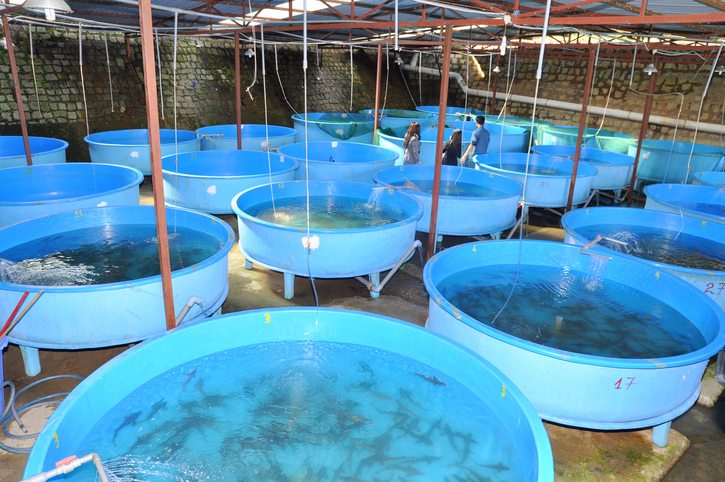 Mycotoxins in aquaculture is a far less common subject of discussion in the agriculture community than mycotoxins that affect land-based livestock. It’s an important subject and one that can have a significant impact on your operation. Mycotoxins can affect the quality of feed you produce and supply, the health of the fish you raise, and the profits your operation generates.

There are 3 possible handling conditions of feeds for mycotoxin production:

Mycotoxins can be deadly to aquaculture species when ingested at high levels. One of the most common types of mycotoxins that affects the aquaculture industry is aflatoxin. Aflatoxins are produced by a mold—Aspergillus flavus—that is regularly found in corn crops grown in the southeastern U.S.

Many aquaculture feeds—especially fish feeds—are corn-based and sometimes fall victim to aflatoxin contamination. Cottonseed meal is another common form of fish feed that can become contaminated by mycotoxins.

It’s important to take preventative measures to ensure that the levels of mycotoxins in your aquaculture feed and grains are safe. The best thing to do is use a high-quality mold inhibitor that will prevent the growth of molds—including Aspergillus flavus—and preserve the nutritional properties in your feeds and grains.

Mycotoxins in aquaculture pose a huge threat to the wellbeing of fish and can be extremely difficult to detect. Two of the main reasons mycotoxins are so hard to identify are:


Another threat presented by mycotoxins is their ability to survive extreme heat and pressure even after feed is extruded.

That means it’s vital to the health of your fish and the quality of your feed to use mold inhibitors, both early in the feed manufacturing process and during the storage of feeds and grains.

The result of these harmful symptoms is a decrease in the health of fish—and all aquatic species—which lowers the profitability of fish farming operations and typically requires additional costs to implement nutritional feed plans that restore health.

Plant-based ingredients have become much more common in fish diets over the last 10 years, due mainly to the lower costs associated with corn and soybeans compared to fishmeal. While the gradual shift to more plant-based aquaculture feeds has initially saved money, it has also brought with it some challenges. Principle among those challenges is the occurrence of mycotoxins in grains and feed.

The chance of mycotoxin contamination increases when fishmeal is replaced with cereal grains and other sources of plant-based feed. “Generally feed ingredients of plant origin are more intensely contaminated with mycotoxins than fish meal or fish oil.”

If mold inhibitors and toxin binders haven’t been added to aquaculture feed to prevent mold growth and mycotoxin production, the only thing left to do is look for the signs of mycotoxin poisoning:


The list of symptoms goes on. Once mycotoxin poisoning is diagnosed, there isn’t much that can be done for treatment. The best action is prevention.

Focusing on Prevention of Mycotoxicosis

There are a few things you can do to mitigate the chances of mycotoxins contaminating your aquaculture operation:


Addressing mycotoxins in your aquaculture operation will help to improve the health of fish and other aquaculture species, and reduce the chances of incurring costs associated with unhealthy livestock and contaminated feed.

2 comments on “Mycotoxins in Aquaculture: How to Avoid Losing Fish, Feed, & Profits”