More than 500 mycotoxins are identified and out of that 50 are analyzed in the laboratory. Majorly mycotoxins are categorised into 5 groups- Aflatoxin, Ochratoxin, Fumonisin, Zearalenone, Trichothecene. 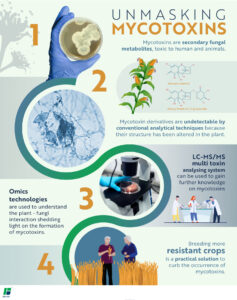 Plant breeders and scientists in the field of phytogenomics are in a quest to breed crops which can metabolise mycotoxins even better. The side effect though, is that the proportion of masked mycotoxins becomes more prominent in crops. This means that with breeding for more resistant crops, a greater percentage of the total mycotoxin load is masked which is alarming for livestock producers .

A high precision analytical standard for detecting masked mycotoxins in feed and crops is of paramount importance. However, most of these compounds are not commercially available for routine testing.

As a standard mycotoxin control programme, along with stringent quality control practices, usage of broad spectrum mycotoxin binder which can even bind and sequester masked mycotoxins in feed. Bentoli’s FixarⓇ Bios could be the best solution to offer broad spectrum binding of all major mycotoxins and its secondary plant metabolites.