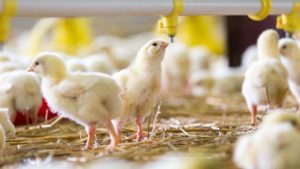 Early nutrition plays an important role in the chick’s life cycle. But in reality early feeding is not commonly practised due to multiple reasons like delay in removing of chick from incubator until the maximum number of eggs hatched from the hatching incubator,  transit time from hatchery to the farms resulting in the mobilization of body reserves (yolk sac) to support metabolism and thermoregulation. As soon as a chick hatches, it begins losing moisture through its breath, resulting in a decrease in body weight . Yolk utilisation is more rapid in  early-fed  chick than in chicks withheld from feeding immediately after hatching. The yolk sac  has a vital role in maintaining passive immunity until the juvenile immune system becomes mature. If feeding is not started immediately after hatching, yolk becomes a source of nutrients which is a source of passive immunity otherwise. As a result, the chick  will be immunocompromised. Poor nutritional status after hatch may inhibit mitotic activity of satellite cells and consequently breast muscle size decreases which accounts for $200 million annually  losses in efficiency and product yield to poultry industry (Uni et al., 2004).

Research has stated that early feeding of chicks stimulates growth of the intestines and might have positive  effects on faster development of  secretory and digestive functions of the gut (Sell et al., 1991) .  Over the years, researchers have tried everything from in ovo feeding to gel packs enclosed in chick boxes  as means of providing nutrition to chicks before their arrival on the farm. The results of those efforts are mixed, however the first feeding idea has intrigued poultry producers too. 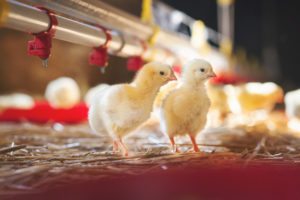 Factors that affect early chick development are gaining interest as the period of time to market progressively decreases and the chick’s first days represent an increasing share of the total time for production. Birds that received early access to nutrients immediately after hatch were 8-10% heavier (Halevy et al., 2000)  than those that were held without feed or those who had just received water. However, the percentage of breast was increased by 7-9% (Halevy et al., 2000)   in all fed birds, birds have shown that early access to feed post-hatch enhanced satellite cell proliferation and stimulated skeletal muscle growth in broilers, supporting the key role of these cells in dictating muscle size . 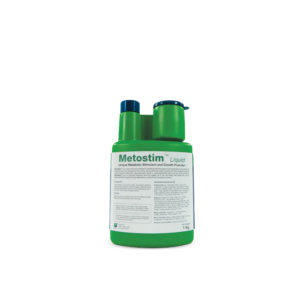 Recent Histopathology study conducted in Bentoli’s research facility proved that treatment group supplementation with Metostim had higher VD: CH ratio  in all segments of SI in comparison to another group supplemented with another product claiming similar benefits in chicks. 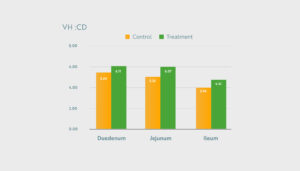 Higher VH:CD  ratio showed better nutrient absorption, which resulted in decrease in FCR and increase in body weight in the flock supplemented with Metostim 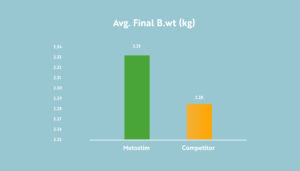 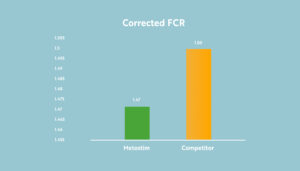