In the current scenario when the cost of feed ingredients, especially the prices of soya meal and corn are soaring, counting each penny invested in the production of egg is very important. Controlling the cost of production becomes very important during summer when breakage of eggs is significantly increased. It is estimated that the incidence of broken eggs range from 6 to 8%.
The occurrence of shell breakage can be categorized into several stages-

It is approximately 3.5 % at the point of lay (Eggleton and Ross, 1971) and can further increase by a few percentages during summer. 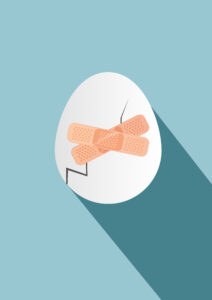 Several factors contribute to the breakage at the point of lay.

Reason behind increased egg breakage in summer
Calcium carbonate is formed by using bicarbonate ion and serum calcium. During exposure to warm environmental temperature, the hen reacts by increasing its rate of breathing (panting) to cool itself. This causes the lowering of CO2 in the blood and produces a condition termed “respiratory alkalosis”. The pH of the blood becomes alkaline, and the bicarbonate becomes less available for formation of calcium carbonate in eggshell secretory cells of the uterus. This disturbance in acid-base balance causes an increase in soft-shelled eggs during summer.
During heat stress calcium intake is reduced as a direct consequence of reduced feed intake and this stimulates bone resorption resulting in hyperphosphatemia. This inhibits the formation of calcium carbonate in the shell gland.
Also heat stress reduces carbonic anhydrase (Zinc dependent enzyme) activity in the uterus. Carbonic anhydrase accelerates reaction between water and carbon dioxide to produce bicarbonate ions in blood serum.
Under heat stress more blood is shunted to the peripheral tissues to dissipate heat with concomitant reduction in flow of blood to the oviduct resulting in poor shell quality. Lastly the ability of layers to convert vitamin D3 to its active form is reduced during heat stress.
Impacts of heat stress on eggshell secretory cells of the hens!
The eggshell is formed by the activity of cells lying in the oviduct and uterus. Under stress the secretions of these cells become acidic, and the cells can be damaged or destroyed. In extreme cases, stress induced effects can result in eggshells that have excess deposits of calcium – a sort of powdery “bloom” on the surface and result in misshapen eggs.

Older flocks in summer exhibit more eggshell breakage
In laying hens above 40 weeks of age, basal metabolic rate becomes sluggish. Additionally, during summer physiological condition becomes worsened resulting in suboptimal calcium mobilization from bone and is less able to produce the needed calcium carbonate. The absorption and mobilization of calcium decreases to less than 50% of normal after 40 weeks of age.
A laying hen requires a daily intake of 3.2- 3.8 gram of calcium per day for maximum egg production and eggshell quality. The hen is genetically capable of placing only a finite amount of calcium in the shell. During summer due to heat stress, in older flocks activation of vitamin D3 in the kidney is reduced resulting into poor calcium absorption from intestine. Secondly, hen loses some of her ability to mobilize calcium from the bone and is less able to produce the needed calcium carbonate. As the hen ages, it lays larger eggs and the thickness of the shell usually declines due to demand-supply mismatch. 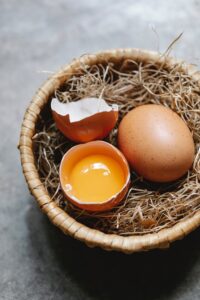 To optimize the calcium and phosphorus supplementation, the amount of calcium and phosphorus is to be increased considering decreased feed intake pattern.
Managing dietary electrolyte balance is key to maintaining acid base balance in blood resulting in synthesis of calcium carbonate for eggshell formation.
Zinc, manganese, and copper are compounds involved in the metabolic process of eggshell formation. Manganese is a metal activator of the enzymes glycosyltransferase which participate in the synthesis of mucopolysaccharides and glycoproteins that contribute to the formation of the organic matrix of bone and eggshell. Carbonic anhydrase, which is a zinc dependent enzyme, stimulates calcium carbonate deposition for eggshell formation. Copper improves the synthesis of shell membrane by activity of copper containing enzyme lysyl oxidase.
Study showed dietary supplementation of zinc proteinate, manganese proteinate and copper proteinate improved the eggshell quality and had reduced the breakage percentage in older flock during summer. 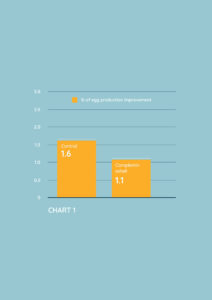 Blend (Complemin® Xshell) of organic chelated zinc, manganese, copper, selenium in proteinate form was supplemented for 28 days in a treatment flock of 11000 laying hens of 73 weeks age. Whereas in the control group of 10400 laying hens of the same age group were supplemented with inorganic mineral premix of zinc, manganese, copper, cobalt, selenium, iron, and iodine for the same period. Flocks fed on feed with organic trace mineral premix (Complemin® Xshell) showed significantly low eggshell breakage during the period of supplementation.