The outbreak of COVID-19 had a major effect on global trade. The “Global Shrimp Markets” webinar was conducted by the Society of Aquaculture Professionals, live on Zoom on the 23rd and 24th of September. It featured distinguished speakers covering the major markets of shrimp consumption and production. This post presents the highlights of the event. 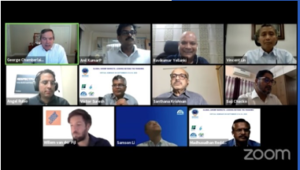 Day 1- Shrimp markets in the US, EU and China.

The opening lecture by Dr George Chamberlain, the President of the Global Aquaculture Alliance, called for a unified marketing effort by which shrimp consumption can be promoted.
Angel Rubio, the Chief Analyst at Urner Barry (a leading food data services firm) elaborated on the shrimp demand in the US market. He said that retail sales of shrimp rose during the pandemic but could not compensate for the lost sales in the food service segment.

Willem van der Pijl, a seasoned industry analyst of the shrimp sector who recently started Shrimp Insights, shared his thoughts on the European markets. He pointed out that shrimp consumption in Europe was down by 6% up to June 2020. The variety mostly impacted by this drop was the ocean-caught premium shrimp. This was in contrast to the farmed penaeid shrimp which were affected by only 1%.

The summer sales of shrimp is believed to have been healthy but the second wave of the pandemic may negatively impact consumption in winter. Among the suppliers, Vietnamese and Latin American suppliers have a competitive position in the European markets requiring other Asian suppliers to reassess their competitiveness. 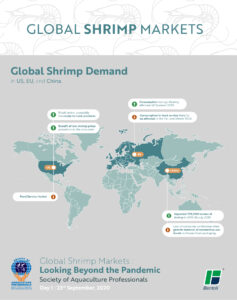 Vincent Lin of Grobest Seafoods presented an analysis of China as a shrimp destination. The country had imported 703,000 tonnes of shrimp in 2019 and was maintaining an increasing trend of imports till July 2020 when particles of Coronavirus genetic materials were present on the packaging materials. Consumer confidence was severely impacted and the import volumes and prices tumbled as a result. Resumption of imports at or beyond the scale of 2019 will be a reality only when consumers gain the confidence that frozen food is not a risk factor in the spread of coronavirus.

Pawan Kumar Gunturu of Sprint Foods, India provided a perspective of Indian exporters to the global markets. He mentioned that shrimp processing was affected due to the lockdown which caused difficulties in access and labor. Cancellation or postponement of purchase orders, decline in prices and cancellation of export incentives by the government have caused further hardships for the exporters. In the subsequent panel discussion moderated by Ravi Kumar Yellanki of Vaisakhi Biomarine, P. Anilkumar of the Marine Products Export Development Authority, indicated that Indian shrimp exports declined by about 15%.

However the export of cooked and breaded forms of products to the US market have seen a climb indicating that Indian processors possess the flexibility to meet the market requirements in short notice. S. Santhanakrishnan of Maritech, a seafood and aquaculture consulting firm, said that India’s ability to supply large size shrimp can be leveraged to serve niche markets globally.

Speaking about the Vietnamese market, the CEO of Grobest Feeds, Samson Lee, remarked that supplies from Vietnam have not been severely affected due to the significant domestic market and sustained demand from the export markets. Strict control of the pandemic and sensible lockdown policies minimized the disruptions in supply. However, a contraction of supplies from about 630,000 tonnes in 2019 to 570,000 tonnes in 2020 may occur. For the long term, Mr Lee predicted a strong growth of the Vietnamese supply and higher productivity through intensification including a return to 2019 production levels in 2021 and from thereon a 3% annual growth. 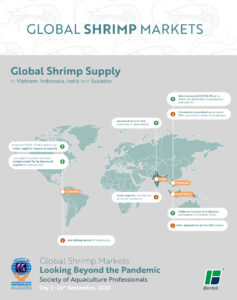 Gabriel Luna, an industry analyst in the shrimp business of Ecuador, spoke about the phenomenal growth of shrimp production and exports in the past ten years. By August 2020, the country had reached a 6% year-on-year increase. Shrimp farmers were unable to harvest their crops in April and May due to the lockdown followed by disruptions in exports to China in July culminating in a historic low in shrimp prices. Fortunately, Ecuador was able to quickly increase its sales to the USA and Europe and achieve a good comeback.

The panel discussion concluding the events revealed that the global supply of farmed shrimp may decline by about 10% in 2020 when compared to 2019. Global trade of shrimp has not been affected to a large extent except in the case of China.

However, lower shrimp consumption in the US where the increase in retail sales has not compensated for the loss of food service sales, means that unsold inventories would be fairly high. Shrimp prices have been battered due to the disruptions of the lockdown. This is in addition to the loss of consumer confidence in China.

While the low prices have been used to stimulate some of the consumption, the response in the major producing countries to low prices will drive future decisions on production, types of products, market focus, and farming technologies. Dr Chamberlain reiterated that the pandemic only exacerbated what was already a downward trend in prices.  The solution was to invest in a unified market promotion by the stakeholders in the shrimp sector to stimulate more consumption.