Managing heat stress in poultry remains a major concern for both producers and scientists.  It accounts for an annual loss of $128 to $165 million in the poultry industry alone. The impact of heat stress results in a drastic change in physiological activity linked with a decrease in feed consumption, growth rate, eggshell quality sand biochemical change like increase in the level of glucocorticoids. This leads to reduced immunity, and breakdown of muscle due to gluconeogenesis and the upward surge of this glucocorticoids will lead to the insensitivity of insulin.

During heat stress, there are an excess loss of minerals (iron, zinc, manganese and chromium) and vitamins (vitamin A, C, and E) in birds leading to mineral and vitamin deficiency(Kumari and Nath, 2018).To overcome heat stress in birds’ managemental measures (early heat acclimatizing and cooling systems) and nutritional strategies (early feed restriction, electrolyte, vitamin, and mineral balance) are practised.
Nowadays Chromium supplementation in the heat stress condition is gaining importance in poultry nutrition due to its wide range of roles in birds physiology. 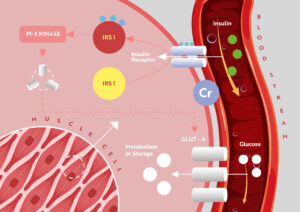 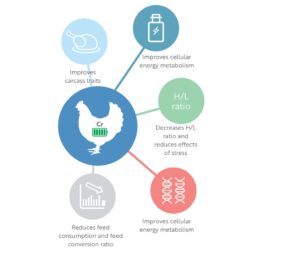 Mode of action:
The reduction in serum cortisol is one of the principal mechanisms by which chromium lessens heat stress-related depression in immunocompetent broiler chicks. Cortisol, the furthermost important glucocorticoid, is known to be immunosuppressive, inhibiting the production and actions of antibodies, lymphocyte function, and the leukocyte population. Supplemental chromium lightens the adverse effects of heat stress on broiler performance parameters associated with oxidative stress, as replicated by the reduced severity of catabolic profile through controlling the expressions of glucose transporter-2 in the liver, as well as glucose transporter-4, NF-κB, and Nrf2 in muscle

How much to supplement on poultry ration during summer !
Supplementation of chromium in poultry diet is an established concept in modern poultry nutrition and there are several recommendations based on different studies. Most commonly nutritionists recommend 400 to 600 ppb for better performance in broiler, layer and breeder flocks.
There are several forms of chromium available in the market to supplement in animal feed. Inorganic forms of chromium are poorly absorbed, for example 0.4-3% of inorganic chromium salts can be absorbed, while the absorption of chromium bound with organic compounds is distinctly higher and ranges between 10 and 25% (Toghyani et al. 2008)